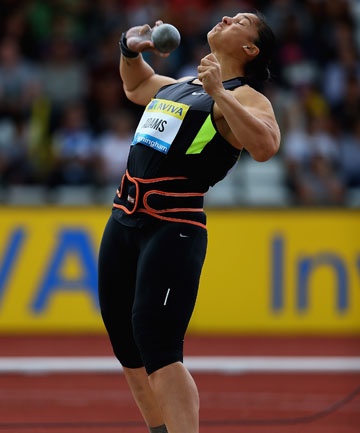 If the back of the circle is a problem, check out this article

Note: Most of the top gliders in the world over the past 30 years have thrown with the short glide and long power position. The most famous exception is Al Feuerbach, one of the best throwers in the world in the 1970’s.

For more information on the short long glide shot put technique, read this

The right foot should be aggressively placed near the mid-line of the ring.  Lifting and turning the toe in slightly appears to be easier for most throwers than trying to turn the right foot all the way to 90 degrees. The right foot placement will depend on the height of the thrower, for example, 6’0” (181cm) shot-putter should have the middle of the foot on the centerline in the ring.

Teaching the proper sequence of unseating then driving the left leg out of the back of the ring to accelerate the shot-putter will help the right leg placement near the middle of the circle.

Doing multiple glides with a barbell or the double drill can also help develop the specific strength needed to complete the glide technique in the shot put.

When the shot putter gets into the power position near the middle of the circle, a common mistake is to slide the hips forward. The thrower’s bodyweight moves to the left leg and the path of the shot put is shortened.

When the shot-putter lands in the power position, the thrower should focus keeping the shot put behind the right thigh and lifting up with the legs as soon as the thrower lands near the middle of the circle.

Keeping the shot put back will create a longer acceleration of the ball resulting in more speed at the release, one of the main factors in throwing far.

Mini glides with the thrower landing on the ball of the right foot and driving up will teach the proper mechanics of the throw.

A common error for the shot put is pulling the left arm in low and close to the body. The low left arm will have a negative impact on the trajectory of the shot.

If the thrower can land in the power position with the shot put back, the next phase of the throw is to react and lift the right side up. However, the left arm can drag across the body preventing a proper blocking action.

Teaching the shot-putter to open the left arm up while keeping the shot put back over the right thigh can create timing issues.

The thrower must practice opening the left arm up and away from the body as the shot put stays down and back.  The thrower can focus on stretching the chest open with a long straight left arm before the final phase of the throw.

Throwers will reverse very quickly to stay in the ring. resulting in a bad release of the shot.

A poor reverse can occur when the thrower is not confident about staying in the ring.  Confidence has to be earned with proper habits developed in training.

Shot-putters will drop the head down, have a shorter glide and throw with a low trajectory, primarily because the technical modifications needed to stay in the ring.

Staying in the ring during training is a must.

Teaching the thrower to lift up from the middle of the circle with a long left arm and finishing with the head back (looking up at the sky) will help teach the proper mechanics.

No reverse throws, with an emphasis on watching the ball at the release is recommended to fix this issue.

Standing throws with medicine balls can be a good drill to help correct the problem also.