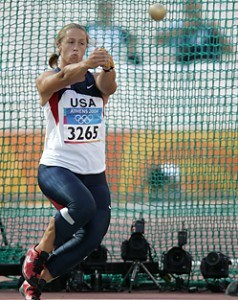 Interesting video on the hammer throw and how to handle circumstances with officials. Betty Heidler of Germany stayed focused and stepped up to win the bronze medal.

The meet was the best competition in Olympic history for the women’s hammer throw.

“TEACHING THE HAMMER TO WOMEN: IS THERE REALLY ANY DIFFERENCE?
The teaching progression for the event is the same for men and women…
The differences in the amount of muscle mass, the distribution of muscle, and the testosterone level of women when compared to men of similar age, total body mass, and training state, may result in different workouts for male and female athletes.
Women’s mean total body strength is 63.5% of men’s total body strength, according to Laubach (1976). According to Wright (1980), men have ten times the testosterone levels of women. Researchers have examined the role of body size in the strength differences between men and women.
According to Wilmore, (1974), when body size is accounted for, women are weaker in upper body
strength than are men. Men proved to be 63% stronger in the bench press than women. A recent study by Hoffman, et al., using isokinetic testing found men to be 50% stronger in absolute terms when adjusted for height and lean body mass. Though women may be weaker than men, keep in mind the 4k hammer may not be as physically demanding as the 16lb is for their male counterparts.
As a result of their flexibility in the upper body and natural tendency to be proportionally stronger in the lower body, women may be better suited for the event than men. The hammer thrower must possess core strength as well as lower body strength and power. Most hammer throwers avoid a lot of upper body work like the bench press because it tightens up the chest and shoulders.
In my experience, women often pick up the basic technique of the event quicker than men probably because they tend to be a little more technically oriented. With their upper body flexibility, they tend not to muscle the implement; they let the movement happen.
Men have a tendency to drag the ball because it feels heavy and they try to overpower the hammer with the upper body. Women often have an easier time learning the event because of their stature and the fact that the implement weighs only 4 kilos and the weight does not change from high school to college.
Improving strength in the lower body is usually not a problem for women. However, most females must also work hard to improve their pull strength doing cleans, snatches, jerks, and high pulls. They must also pay special attention to improving their core strength or torso power. This is very specific to hammer throwing and most female hammer throwers can benefit from torso exercises in the weight room in addition to the medicine ball and kettle bell throws…

Because of differences in hormone levels women cannot back off as early as men when peaking.”