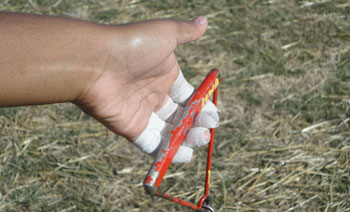 Hammer Throw Safety
The hammer throw is part of the long tradition of objects being hurled for distance going back thousands of years.

1. SAFETY IS NUMBER ONE
a.) Although all throwing events present the danger of serious or even fatal injury, the hammer throw is the single most dangerous event to officials and people around the site of the venue. Impact from an in-flight hammer, or even wire, will almost certainly result in serious or even fatal injury. One caution given to retrievers and officials at this event is that the ball of the hammer, due to its high velocity, will destroy what it hits. Even the wire, due to the speed of rotation, can cut someone like a sword if they are hit in-flight.

b.) Officials and retrievers in the field should always remember to never turn their back or look away from the circle while in the field. Always assume someone is or could be entering the circle to throw at any time. Retrievers should walk backwards or to the side with their heads turned when returning to their position next to the sector line after bringing an implement to the athlete area. All those working in the field should observe warm-ups to familiarize with the visual background of the implements in-flight, which can be especially hard to pick up at night or dusk. A good rule of thumb is the ring officials are responsible for observing the field for potential safety concerns and the field officials do the same for the ring.

c.) Officials seated or standing around the ring should be well back of the net. Seated positions are preferred, but there are some hammer venues that do not allow the official on one side of the ring to be far enough back from the ring in a seated position, such as when the cage is located very near an embankment or building. In these situations the ring official may have to use a standing position. Understand all nets have some amount of give. A good practice is to have a strong crew member pull hard at the side of the net where the ring officials will be, and place the chairs at least a foot or two outside of the farthest point which you can pull the net to outside the ring. It is extremely dangerous for officials or anyone to crowd the net during warm-ups or the competition. Moreover, during warm-ups people should not be standing near the cage, especially with their back turned. Always error on the side of caution. Ask nicely, but be direct and uncompromising when addressing an obvious safety risk. Hammers can hit the top of posts and come over the top of cages, landing in areas around the cage which are thought to be safe. Although a thrower can lose control on any throw, competitions in wet conditions cause throwers to ‘lose’ throws into the side of the net more often. It is much preferred to sacrifice some distance in viewing foot fouls rather than take any unnecessary risks by being too close to the ring. It is also a good idea to check netting prior to each competition to make sure it is safe…no holes or rotten netting.

d.) Field officials should know and accept their limitations. If you have any doubts about vision or mobility, NEVER accept an assignment in the field for the hammer.

e.) Athletes should never be allowed to do arm swings or rotations with a hammer outside the cage. This practice is extremely dangerous. The cage should be opened early whenever possible to give athletes the chance to warm-up fully in a safe manner. Note: It is permissible to rotate or swing a safe object, such as a cone or broom, outside the cage as part of a warm-up. During competition the only athletes that should be allowed a hammer in hand are the athlete called “Up” and “On Deck.”