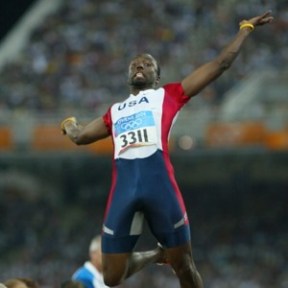 The approach should be a continuous build up of speed with proper mechanics.

The final four strides set up the takeoff, with a solid long jump penultimate step and plant onto the board.

Back of the runway

When teaching long jump starts from the back of the runway, a simple crouch type start is best for beginners, similar to an acceleration run from a two-point stance.

More advanced jumpers sometimes add individual styles at the back of the runway but use a visual check point to start the acceleration pattern.

Speed on the runway

Maximum speed is not required in the long jump approach. Jumpers sprint down the runway with good acceleration mechanics and transition into maximum velocity mechanics during the final steps on the approach run.

Transitioning from acceleration to max velocity mechanics should be smooth with the body alignment maintained as the jumper slowly rises up into a good sprinting position.

Goal of the approach

The fourth step is the coaching mark to judge adjustments on the approach.

Long jumpers will adjust steps visually to hit the board and have a fair jump. Checking the board early in the approach can be helpful to make corrections sooner: this will allow a faster more controlled approach.

Coaching Tip- when teaching long jump approach runs practice visual steering during practice and learn how the long jumper corrects the speed of the approach.

During the final steps of the approach correct running mechanics are critical for consistency.

In preparation for the takeoff the jumper lowers the center of mass without compromising speed. The long jump penultimate step will lower the hips and prepare the jumper for takeoff. The body lowers and the foot rolls from heel to toe and the body moves past the penultimate stride.

As the jumper prepares for takeoff, the jumper settles or lowers the hips slightly to prepare for takeoff. The penultimate stride (second to last step) gets the jumper in position to drive up at the takeoff.

A good coaching cue for takeoff preparation is “flat-flat”, the jumper focuses on landing flat-footed to prepare for the drive during the long jump takeoff.

The arms swing and alternate forcefully at takeoff. The free leg is also driven aggressively, with the knee driving up and the foot tucked and the toe pointed up.

The purpose of in air mechanics is to minimize forward rotation and set up a proper landing position.

Proper technique in the air will start with the free leg returning under jumper, similar to running one step while on the air. The upper body will be tall with a flat back.

In the hang style, the jumper extends the arms up to slowdown forward rotation.

With the hitch kick style, the jumper moves like running in the air.

Pictured is Bob Beamon, 1968 Olympic Champion, he set a world record that lasted over 20 years.

If good positions are established at takeoff and forward rotation has been reduced, a good landing will be much easier to preform.

After the peak of the jump, the arms sweep forward and down to the hips. The feet are extended out until the jumper hits the sand.

The knees and hips absorb the impact of the landing as the body continues to move forward. Then the legs straighten in front of the jumper allowing the heels to slide into the sand. The lower body should slide into the impact area trying to create one small landing impact area that was first created during initial touchdown of the body. This is the best long jump landing technique for to maximize performance.

Coaching Tip- when teaching long jump landing technique use a ramp to increase air time to complete the proper execution of the landing in the long jump.