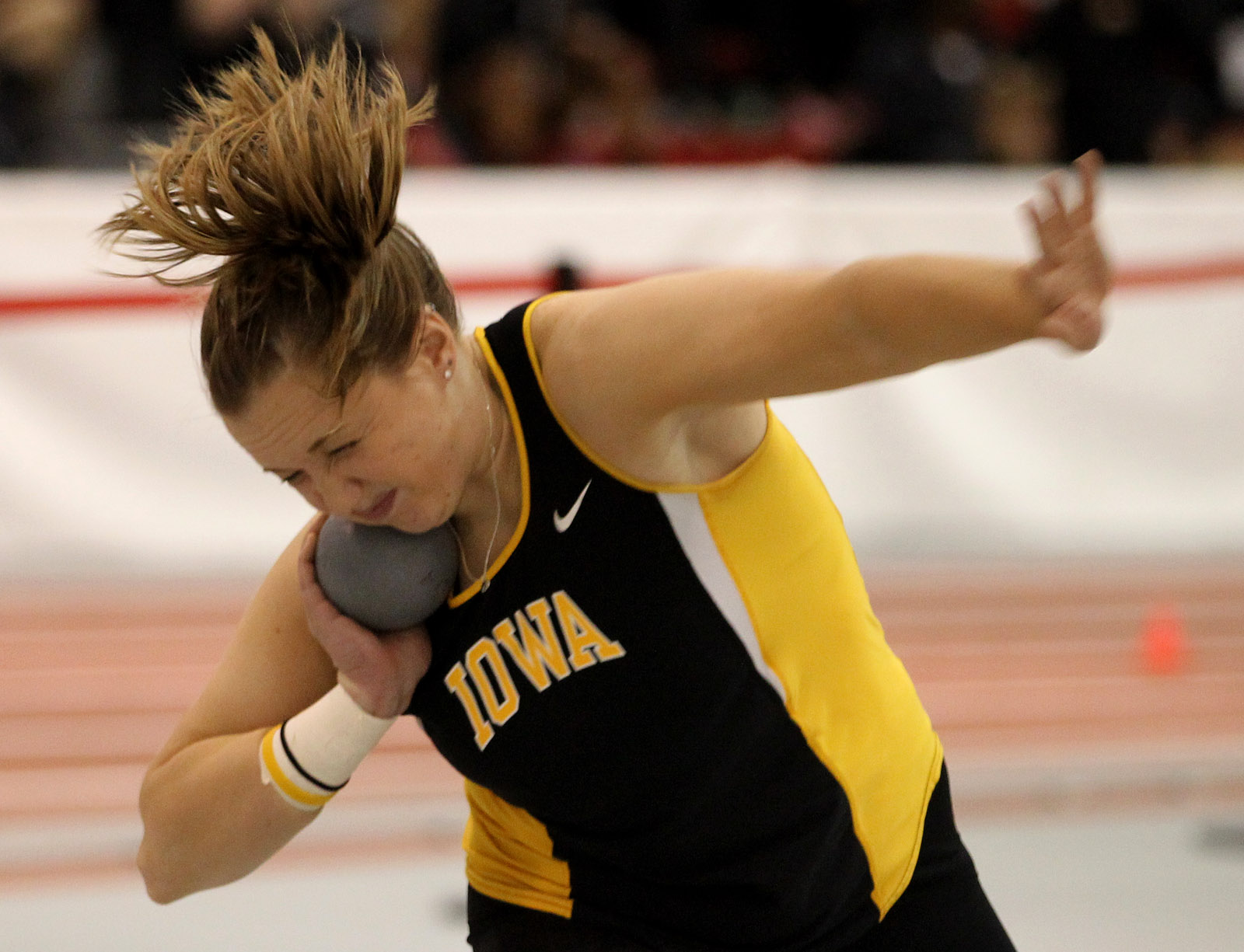 For beginning throwers, a wind up can cause problems with balance and consistency; therefore, a static start is recommended for novice throwers in the spin technique.

The athlete should go into a slight squat straddling in the center of the ring at the rear of the circle, with the flat feet about shoulder width apart. The thrower’s body weight is evenly distributed or has slightly more weight on the left side.

The shot is raised over the head; the wrist is bent facing upward, the ball rest at the base of the fingers. The shot is then placed on the neck, most spinners hold the shot closer to the ear then the chin, and the ball is further back on the neck when compared to elite gliders. The left arm is straightened and held out near the mid-line of the body.  The torso inclination can vary, however most beginners have only a little forward lean. As the thrower develops, a deeper squat at the start and more upper body slant may be adopted.

The wind up should be with the upper body turning to the right, with little weight shift of the lower body. The athlete executes the wind up with the feet flat or slightly up on the toes.

During the early development of the spin, a big wind up was used by many of the top throwers, similar to the discus wind up in the 1970’s when the spin shot put technique was starting to evolve. It is more common today to see a minimal wind up with little to no weight shift in the back of the circle.

Out of the back

Mike Turk in his article “Building a Technical Model for the Shot Put“ states “As soon as the thrower is facing 3 o’clock, I want him to sink on the left leg and drive the right leg ahead by lifting the right hip and knee over the left side to the middle”.

The right foot leads the sprint to the middle and an active push from the left leg helps to speed up the lower body. As the right foot makes contact, it should land just past the centerline and land between 7 o’clock and 9 o’clock and the left leg will be airborne near the 3 o’clock position. In addition, the knees are brought close together in the middle of the circle to help speed up the throw and help create more torque in the power position. Some advanced throwers wrap the left arm across the body as the right feet lands, creating additional separation.

Teaching Progression for the Spin

In the stand throw for the spin shot, the thrower gets into the power position with a narrow base; usually the feet are within the front half of the circle. The shot-putter focuses on turning then lifting with the feet, which is the opposite of the glide technique.

The athlete executes the full technique but a slower pace focusing on body positions, usually with lighter implements.

Without a wind the thrower steps out with the right leg, tapping it on the ground at the 3 o’clock position.  The left side should point at 3 o’clock with the shoulders level, the left leg will support most of the body weight (90%+).

The wind from the full throw can added after the drill is mastered.

Turn to the middle

The athlete executes the first half of the throw, but the left leg remains in the back of the circle. The shoulders and left arm face the center of the sector (12 o’clock) and the right foot lands at 9 o’clock near the middle of the circle.

Step out, turn to the power position

The thrower performs a step out, and then works on sprinting from the 3 o’clock position, landing in the power position. The drill should simulate the actual body position in the full throw, keeping very little weight on the right leg on the step out.

Turn to the power position

The athlete executes the initial throwing motion, landing in the power position. The emphasis is on balance and landing in a good throwing position with most of the body weight over the right leg.