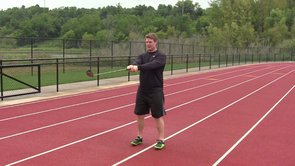 Starting Position
The thrower and hammer will work as one unit, turning together: the thrower-hammer system will always stay aligned for beginning hammer throwers.

Start on the track with the hammer thrower holding a hurdle board or golf club. The thrower will set up with both feet flat, shoulder width apart and knees bent in a quarter squat position.

The bodyweight is either 50/50 or slightly more weight on the left leg.

The left hand grips on the hammer on the last groove of the digits.

Throwers either uses a left handed glove with open fingers or tape. The right hand is placed on top of the left loosely to secure the hammer in place.

When first teaching the hammer throw, use a golf club or top of the hurdle, or some other type of implement that is about 3′-4′ long and light (under 3 pounds).

The thrower will hold the implement  straight out from the center of the chest with the shoulders leve. The throwers eyes will be up, looking down the end of the hammer head.

The hammer thrower initiates the movement by turning to the left 90 degrees. The bodyweight will shift from flat feet to the left heel and right toe.

Both legs will stay bent during the turn to 90 degrees.

The hammer thrower can turn back to the right to 0 degrees slowly and repeat the drill.

The hammer throwers starts at 0 degrees, the turns to 90 degrees (similar to the previous drill) then pause for two seconds.

Perform the previous hammer throw drill without pausing. This drill should be done slowly with the thrower on balance.

After turning to 180, the hammer thrower will pick up the right foot and place it just in front of the left foot.

The right foot should be dorsi-flexed and brought up to above the ankle bone of the left leg; the right foot is toed in and kept close to the left shin.

The right foot is planted at 180 degrees, heel first just in front of the left foot.

The right foot action is the primary focus of the drill. After the hammer thrower learns how to plant the right foot properly, the drill will be advanced to stepping to 270 degrees.

To help get the body to 270 degrees, the left foot will turn more aggressively ( heel-side-toe). The entire thrower- hammer system will face 270 degrees.

The right foot will plant flat footed, then the hammer thrower rolls onto the ball of the right foot and turns. The heel strike during the early turns will help keep the thrower in proper position.

Lesson one is complete, next we will put the parts together and learn how to turn continuously in part two.