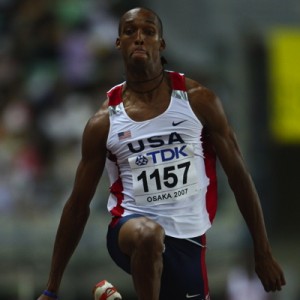 Lowering the Center of Mass for the Triple Jump Takeoff

Reasons for Success
It seems that this technique of lowering the body slightly once it has passed the takeoff foot crated the potential for greater success in several ways.

1. The lowering does permit greater horizontal displacement of the body while still in support, as previously discussed.
2. The opportunity to lower once past the takeoff foot seems to increase time spent on the board slightly, fulfilling the athlete’s sensed need for greater impulse values at takeoff.

Also, because this opportunity to lower the center of mass exists, it seems to lessen the temptation for athletes to lower improperly in the final few steps, thus con- serving precious velocity.
3. The fraction of a second of passive yielding and waiting while the shin rotates forward improves the ability to extend the hip and push forcefully. The tibia rotates forward and then stops, enabling the force created at the hip to be applied along the long axis of the shin in a more efficient arrangement. This is very similar to that which we see in other jump takeoffs.

4. This more forceful extension results in greater stretch reflex development in the leg, assisting the speedy recov- ery of the leg into the hop cycle. In short, rather than just running off the board, the athlete is able to push off of the board, setting up a more elastic recovery. Reexamination of those successful jumpers who visibly lowered or gathered prior to takeoff showed that they all, in some way manipulated the body into a position from which they could push in this manner. This later study showed these athletes all achieved the shin positions described and employed a very aggressive hip extension and pushoff from the board.
5. This technique enables the hip to extend an instant later. This later extension seemingly delays the recovery of the leg in the hop cycle a bit. This delay eliminates the possibility of premature cycling of the hop leg, and the chance it may ground excessively in front of the jumper’s center of mass and destroy the hop phase.
6. This technique results in a lower trajectory of flight during the hop phase.

This not only lessens the chances of crashing in the hop landing, but the lower trajectory provides a vertical path of acceleration for the athlete when the hop phase is entered. In short, the flatter hop sets up a higher step, much as the lowering that occurs on the penultimate step of the long jump sets up a higher takeoff angle at takeoff.
Potential Problems
While I have encountered no problems when the technique is properly executed, these are common errors the athletes experience or coaching challenges which result.
1. Lowering In the Final Steps. This lowering is usually associated with pressing and impatience. The final steps of the approach should be very smooth and controlled, and the athlete’s center of mass should be locat- ed as high as possible until the takeoff foot contacts the board.

The athlete should not try to create any addi- tional velocity or momentum in the final few steps. The goal here should be attainment and preservation of good body position.
2. Premature Firing on the Board. Often athletes will try to takeoff immediately upon contact with the board in a pulling type or grabbing type movement against the board. They should be taught to be patient and allow rotation of the tibia for an instant before attempting to takeoff. Wait and push, don’t pull.
3. Poor Free Leg Movement. The forward moving free leg and the takeoff leg work in unison. If the free leg is not moving aggressively forward and covering significant distance during the support phase, the hop leg ex- tension will be compromised. Certain athletes react better to free leg cues than they do to takeoff leg cues.
4. Handling Higher Velocities. As in all skills, the cuing systems used at slow speeds may not be effective at high speeds. At low speeds, it is very easy for the athletes to feel the shin rotate, the knee move down and forward, and an aggressive pushoff. At high velocities, these are hard to feel.

I have had much more success at high velocities by cuing pressure on the ball of the takeoff foot, and by cuing the path of the center of mass.

This path should consist of a slight lowering of the hips beyond the board, followed by a leveling off and flat trajectory into the hop phase.
Appearance vs. Reality
The concept described, when performed at competition speeds, is subtle and at times possibly very difficult to see. Good coaches know that what we see on video is not necessarily what athletes feel at high speeds.

The approach I have found successful is to perform the technique more radically at slow speeds in practice, and then to keep a touch of that feeling during competition.
Closing
In short, my experimentation with this technique has been most rewarding. The improved performances have obviously been a welcome result. However, the development of this idea, observation of its implementation, and the results have answered many, many long standing questions that I have struggled to answer through- out my coaching career. Finally finding these answers is perhaps more rewarding.