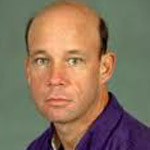 The History
In my formative years of coaching, I became intrigued with the takeoff from the board in the triple jump.

Drawing upon my coaching experience in this and other events, there were several factors I was convinced were important to success.

Of course, I was sure that deceleration was to be avoided at takeoff.

Secondly, I was sure that the recovery of the free leg during the hop phase was reflexive and dependant upon stretch reflexes developed in that leg at takeoff.

Thirdly, displacement of the body during takeoff (beyond the board and the planted takeoff foot) was essential to developing these reflexes.

Finally, the free leg action at takeoff had much to do with the ability to maintain posture and control rotation at this point. successful.

I observed many athletes who displaced well, maintained horizontal velocity, and exhibited the same free leg action. Yet, they experienced various degrees of success and showed differences in their ability to enter the step phase properly.

I even continued to see athletes who seemingly gathered or set up the takeoff from the board (generally considered a fault), yet were consistently successful.
Another complicating and contributing factor was that I had seen many athletes who were seemingly always seeking some way to increase the time spent on the board and increase impulse values (impulse equals the product of force and time). I refused to believe that these athletes were all wrong.

I believed that they inherently sensed a need for greater impulse development and a bit more time on the board, but maybe didn’t know exactly how to go about it.
The Experimentation
My first reaction was to maximize displacement in the athletes I coached. Again, I received various re- sults. The timing involved in the hop leg cycle was different from one athlete to the next. Then something occurred to me.
Because of my observations with the athletes who gathered or lowered, I began to experiment with low- ering the center of mass in the final steps with certain athletes. This was done in an effort to displace even more and further increase the stretch reflex on the hop leg.

The rationale was simple; since the leg itself was of fixed length, if the body’s center of mass were lower, the center of mass could be moved farther beyond the board while the foot was still on the board.

Specifically, I decided to teach lowering the center of mass slightly, but to allow this lowering to occur during the support phase of the takeoff step, once the athlete had passed the planted takeoff foot in order to eliminate the deceleration normally associated with lowering.
The Implementation
I began to teach the triple jumpers to run comfortably with a high center of mass, place the foot on the board, and then allow the shin to rotate forward during support more than in a normal stride. This rotation of the shin lowered the body slightly once it had passed the takeoff foot. It also placed the knee in front of the ankle and placed pressure on the ball of the foot.

The athlete, upon reaching this position, was then instructed to violently extend the hip, perceivably pushing against the pressure felt on the ball of the foot.

In this case, the response was immediate. Every jumper in the group improved dramatically.

Next, the results and problems will be discussed…