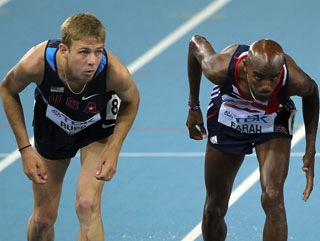 Teaching proper technique early was one of key ingredients to the success of Galen Rupp. Coach Alberto Salazar worked with Galen Rupp for 12 years before he won the silver medal in the 2012 London Olympics in the 10,000m.

Coach Salazar emphasized technique because of his own failures as an elite athlete. “I know that my lack of proper technique and biomechanics caused me to get a lot of injuries and shortened my running career,” said Salazar.

Runners that make changes later in their career could be at higher risk for injury, but the long-term benefits can make a significant difference in performance.

Coach Salazar spoke about one of his athletes, “When you start changing an athlete’s form, there’s always a risk,” Salazar said “he’s willing to take that risk, because he doesn’t want to be the guy that’s just trying to get a bronze medal. Not this time. This time, he wants to be the winner.”

Adjusting running technique is a risk-reward proposition for coaches and athletes: possible improvement in performance versus a greater risk for injury as the body adapts to the new style.

Top distance runners need to utilize outstanding running mechanics and follow the technical formula for used by sprinters to help with speed development in training and during critical pace changes during a competition.

Watching film of Olympic Champion Haile Gebrselassie, Coach Salazar noticed, “His hips are directly under his body, which is directly above his foot. So all that force is going up through his legs and hips into his upper body, to propel him forward. There’s nothing being lost there.”

The positions of the elite distance runners are very similar to the top sprinters, long strides with a full range of motion from the knee drive to the heel going back to the buttock, then reaching for the ground and striking the foot back under the body.

As Salazar watched tape of top runners like Olympic Record Holder Kenenisa Bekele, he was reminded of world class sprinters, “The more tape we broke down,” he said, “the more it became clear: he was harnessing the same advantages as a sprinter.”

“I thought, is that just coincidence? Or could that perhaps be part of why he’s so good?”

When it comes to distance runners developing speed, biomechanical considerations are vital to the runner’s success.