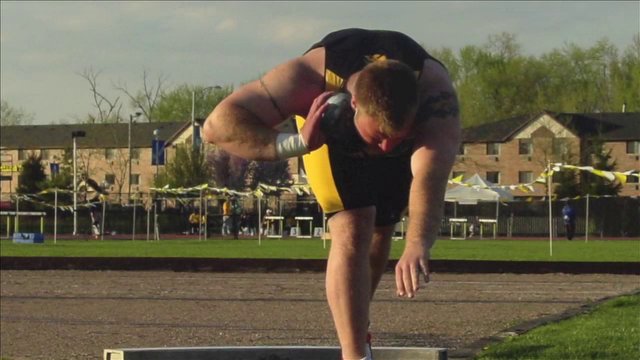 Various styles of the glide

The glide style of shot putting has many outstanding technical throwers since the days of Parry O’Brien started facing the opposite way of the put. Two technical styles have survived over the last several decades.

Of the top-level gliders in the world, most of the athletes are using the short-long style of throwing, although many coaches belief in the long-short method. Regardless of the style used, the coach and athlete must find what can work best of that individual.

Coaching Points for the Glide

The shot is raised over the head; the wrist is bent facing upward, the ball rest at the base of the fingers.  The shot is then placed on the neck, under the jaw with the thumb touching the collarbone.

The ideal path of the shot is straight as possible from starting position to the release, with a gradual increase in the height of the ball from the start of the glide.

The start varies from thrower to thrower, but some basics remain constant.  The purpose of the start is to enable the thrower to get in to a good power position with more speed on the ball than from a standing put. A good technical thrower with the glide can gain 10-20% from the stand throw.

The thrower faces the rear of the ring in an upright position with the feet together, from this position several different starts can be used:

The upper body is bent slightly over the right leg, knees are together and the left foot is slightly behind the right foot at the starting position. The lower body falls back or unseats from the waist, then the left leg is stretched and kept low as it extends across the ring.   The right heel leaves the rear of the ring after the left leg is extended. The left arm is down and relaxed, the upper body remains passive, the thrower’s eyes and head remain back.

As the thrower gains experience, the thrower can lower the upper body into a crouched position.

The upper body is bent slightly over the right leg, the left foot starts in the middle of the ring, and the legs are brought together at the knees as the upper body is dropped down slightly. Then the lower body unseats and left leg is either stretched or aggressively driven to the toe board, depending on the thrower’s skill level. The right heel leaves the rear of the ring after the left leg is extended.

Most top-level throwers use the advanced start, some world-class throwers add to this technique.

Most of the force to get across the ring is generated by unseating and driving the left leg to the toe board. The right leg is picked up and place near the center of the ring. The upper body remains passive and back, for most throwers the left arm will remain back and over the right leg.

Once the athlete starts the glide across the ring, the thrower must keep the ball and body moving toward the throw. Shot-putters need to increase the speed of the throw during this movement and set up a proper throwing position.

The shot-putter lands on the ball of the right leg, the left foot touches down after the right foot, the feet will have a right heel to left toe relationship, so the hips can open during the putting phase. The throwing stance varies in width depending on the technique employed by the athlete. The long-short technique has a narrow base, with the left foot landing on or past of the mid-line of the circle at a 90-degree angle from the throw. The short-long style utilizes a wider throwing stance, generally behind the middle of the circle with the right foot turned slightly from the starting position in the back of the ring, approximately 100-140 degrees from the throwing area.

The shot remains over the right leg, the upper body is still passive, and however, some athletes actively open the left arm as the athlete reaches the power position, but the shot is always kept back over the right foot with good technical throwers. The shot put should down, the right elbow below the right hip when looking at a side view. The lower the ball, the greater the pull and the longer the path to apply force on the shot.

The longer base has an advantage because of the wider base of the power position, there is a longer increase in the acceleration path of the shot will travel when the athlete applies muscular force. However, the longer path of acceleration must be over a short period of time because the velocity of release is such critical factor for the shot putter.

The left leg braces with a blocking action, as the left arm opens to the middle of the throwing sector. Then, the right side begins the throwing action with a high arm strike, the elbow up near the ear, the left arm pulls in toward the chest. The left hip remains behind the knee to increase the blocking action during the put; the legs extend and remain on the ground as long as possible. Finally, during the final putting action, the legs lift off the ground and the put is finished at a throwing angle between 37-41 degrees.

The right leg lands against the toe board, with a flat foot parallel throwing area, and then the center of gravity is lowered for added stability and balance after the release of the shot.

Teaching Progression for stand throws in the shot put

Two handed chest pass:  The athlete steps forward with the left leg and throws a light medicine ball. The thrower has the elbows out and the thumbs down for the chest pass throw.

Next, the thrower can twist to the right and throw with more force from the right side.

2. The next progression the crunch drill the athlete places the left hand to the forehead.

3. The final progression n the crunch the shot-putter places the left arm down over the right knee to create some separation from the upper and lower body.

All the crunch drills can also be done with a medicine ball.

The shot-putter sets up the upper body similar to the crunch drill with the left arm down. The left leg is lifted up 4-8 inches off the ground to simulate the right to left action in the throw. The delivery phase is the same as the full throw.

The width of the base will depend on the type of technique used.

The thrower gets into the power position, for most gliders the right foot will be placed in the back half of the circle. Once the left leg touches the ground, the thrower focuses on lifting up with the upper body.

Teaching progression for the glide

The athlete gets into the starting position about one foot from a wall; the thrower lets the body fall back into the wall. This drill teaches the first movement in the glide, the unseating or falling back of the hips.

The shot-putter unseats the body, and then stretches the left leg slowly across the ring. The right stays in the back of the circle, the right heel will remain on the ground. The upper body stays down and over the right leg.

The thrower executes the previous drill then pauses and picks up the right leg and places near the center of the circle.

This drill can be executed slowly at first with a stand throw, then the thrower can progress to a step back with the athlete constantly moving forward and execute a put.

Throwing from a full glide without a reverse is an excellent drill for developing a powerful block and helps the athlete to apply force over long period of time to the ball.