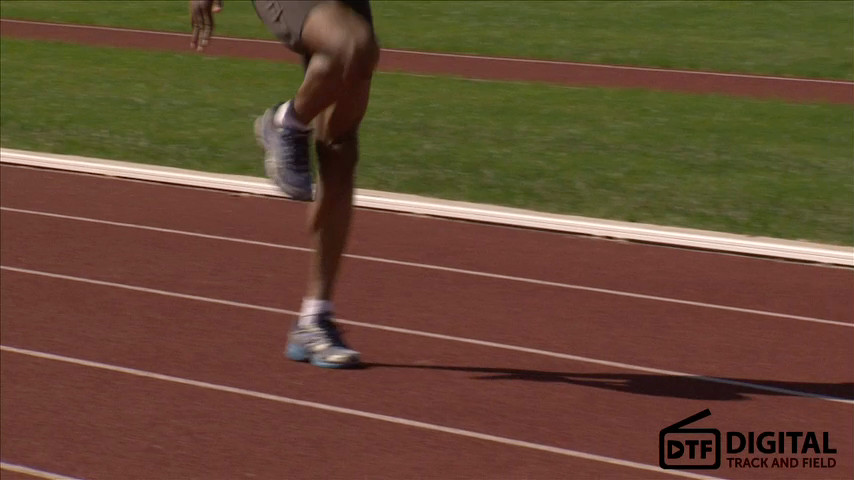 GENERAL PHILOSOPHY
Our philosophy is that we can beat most teams in the 4 x 100 by utilizing superior exchanges that have been honed to a fine edge.  This includes opponents with superior foot speed.  In the 4 x 200 the exchanges will also make a difference against teams of equal or slightly superior speed.

GETTING YOUR STEPS
Once in good condition we need to get our steps down for the exchange.  In the 4 x 100 the method is to count 20 steps back from the back of the Olympic exchange and mark that distance. (The steps listed here are guidelines. We have used as many as 24 steps with some individuals)  The steps are toe to heel steps.    You will proceed back to the end of the Olympic zone and assume the correct starting stance (slightly crouched, feet staggered with toes pointing forward, hips parallel with the exchange zone line, head turned to view the mark.)   When the incoming runner hits your mark (20 steps back) you will take off full speed and not look back.

The incoming runners job is to catch you and give the command “stick”.   In the 4 x 200 the method is basically the same except that the steps are different.  From the Olympic mark you will count up 10 steps and mark the distance.  (Again this could vary some)

This is where you will position yourself and the Olympic mark becomes the mark you watch.  You can also put tape here but we usually do not.  When the in coming runner hits that mark, you take off.  From then on the exchange process is the same.

Again each team or group of runners may need to adjust your steps depending on personnel.   It’s important to remember that once the exchange is completed to wait in your lane until all other teams have exchanged before leaving your lane.  This is especially important for the first and third runners who exchange on the curve.

THE EXCHANGE PROCESS:
The key to the exchange is the arm and hand coordination of both runners.  The in coming runner must first catch the out going runner.   As he does so he must watch the arm action of his teammate.  The “stick” command should be given when the receiving arm of the out going runner is moving forward. ( A common mistake is to call “stick” too soon, causing the outgoing runner to put his hand back too soon)   This gives the runner the split second needed to get his receiving arm and hand back to receive the pass.  If done correctly neither man will have to over reach and break the rhythm of their arm action.  When receiving the baton the out going man should give his teammate a good target by getting his receiving hand up.  This is accomplished by keeping the elbow straight, extending the receiving arm out and slightly bending at the waist.

If the incoming runner misses the target don’t keep the arm back but rather continue the arm action and wait for another “stick” command.  You have the entire zone to make the exchange, don’t give up if it is not made the first time.

We spend part of at least 3 practice sessions per week on the sprint exchanges.    If you overlook this part of your workouts you are missing the opportunity to score very valuable points for your team.